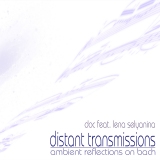 Three electro-ambient reflections on J.S. Bach's music.
The music on this album is deep, beatless ambient, ranging from dark to bright in tones. Its general atmosphere is relaxed, making it suitable background music for relaxation and meditation, while its delicate ambient structures and rich tonal layers lend themselves easily to deep listening, audio voyages and creative visualization. Musictrade release MT002, released July 26, 2005.

Reviewer: Sykes - favoritefavoritefavoritefavorite - July 24, 2007
Subject: Reflections on Tarkovsky
The Russian composer Eduard Artemiev, along with Andrei Tarkovsky the philosophical, transcendental Russian film-maker, created some of the most powerful combonations of image and sound possible. One such example is 1972 film Solaris. Tarkovsky who deeply revered Bach, worked closely with Artemiev to stir the imagination and see Bach in a different way - I couldn't imagine a more sickeningly atmospheric soundtrack.

Doc and his frequent collaborator Lena Selyvania have crafted something of a companion piece to Artemiev's work on Solaris. Each of the three tracks, seemingly simple in construction, but in reality lush and dense, could easily fit into the film. But what makes the album as a whole stand alone is a shared connection with Bach - to allow such a powerful force into one's soul is to allow oneself to create such equally powerful art, something which Doc and Lena have nearly succeeded.

Distant Transmissions - Ambient Reflections on Bach, is more than just ambient; it is pervasive and endearing, aching and wholly sincere. Recommended.

Uploaded by Musictrade on October 1, 2005